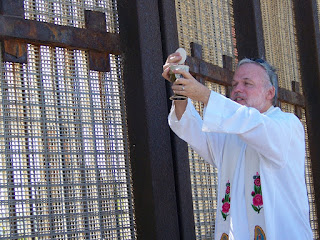 There are a few opportunities to have a mass said at the Border with the priest on one side of the wall and the migrants on the other side.  Migrants of all ages and all faiths come to the wall to listen and participate in the Mass. 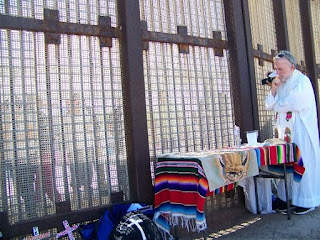 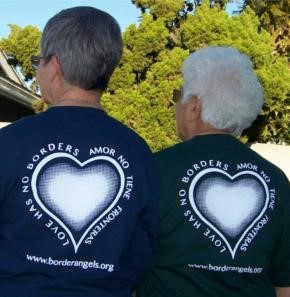 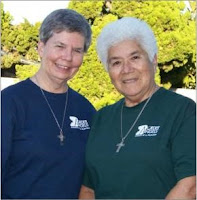 Sr. Rosie Nicholson, RJM and Sr. Natalia Mejia, RJM model the Border Angel shirts they wear while ministering to immigrants on the border.

There has been a tragic rise in the number of migrants seeking to flee from the growing poverty caused by environmental degradation... Laudato Si, #25 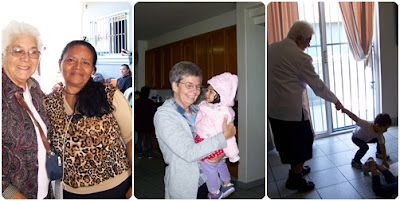 
Sr. Natalia and Sr. Rosie go to the shelter each Tuesday and Wednesday from 9:30 A.M. - 12:00 noon to do art projects with the children and some of their parents.  One of the mothers made a 3 string-art of people and in Spanish wrote, “God’s blessings on this shelter, home of friendship.”  The mom asked that it be hung in the front hallway where it would be seen by all who would enter the shelter.  After leaving the Center, Sr. Natalia and Sr. Rosie go to stores to buy items that the migrants need, such as, backpacks and clothing.
The migrants really appreciate the time and presence of the sisters with them.  The volunteer workers also frequently tell us that they appreciate having religious sisters, because of our presence, smiles and simple activities with the children.  The sisters help to express the love and presence of God to them, and as well to the migrants suffering so much pain.
During the evening prayer, back in their community, Sr. Rosa, Sr. Norene, Sr. Natalia and Sr. Rosie reflect on their day and share with each other, the gifts and graces of their experiences.
Sr. Rosa is much appreciated for her “presence” with the adults and any young children who want to stay close to their parents. Sr. Rosa listens one-on-one to the people and shares the Lord’s love and words from her heart.  The group sings together and have deep moments of silence remembering that God, our loving creator, Jesus and the Spirit are in our midst….Sr. Rosa invites them, “be still, listen and talk with the living God in your hearts.”  Some people are simply moved to tears.  If they wish, the migrants share their thoughts and prayers in the group.  A boy of 7 years old, gave thanks to God for helping his family arrive at this shelter safely after being detained by immigration at the border entry.  As the prayer time concludes, several people of faith ask Sr. Rosa for her blessings as they prepare to leave the shelter and continue their journey of asylum while staying with family or a sponsor.
Each day, at the end of the prayer, the people approach Sr. Rosa and thanked her. One man gave her some pesos and Sr. Rosa gently said, ‘no thank you – you are going to need this money.’  He insisted and said, please receive it, I give it with all my heart and thank you for your presence with us.  This is truly an application of the Gospel experience, where the poor want to give of the little they have.

PRESENCE in the Present Moment is all we have together with each man, woman, and child at the shelter… and it is truly holy ground.

There has been a tragic rise in the number of migrants seeking to flee from the growing poverty caused by environmental degradation...  Laudato Si, #25

"I lived in San Diego, CA at Casa de Esperanza and working with the migrants for two months and 10 days.  I desire to share with you this lived experience.  When asked if I wanted to go and work for 3 months with the Sisters in the United States who minister to the migrants, at that moment I experienced joy but also some worry.  I did not feel capable to do this even though on several occasions I had said that I would like very much to work in this type of apostolate, but I knew God would help me and He did!
On the first day they took me to visit the Center.  Immediately they asked for someone to speak with a family (the mother and two sons: one 14; the other one 12) who felt desperate because of the difficult situation in her country.  She left a son behind and did not have somewhere to go (up until now, they still do not have a place to go).   I asked God to speak through me and he did it because, little by little, the mother as well as her sons calmed down and felt at peace.  At the end, they appreciated that someone spoke with them.  There I discovered that this could be my apostolate: to speak with people, to listen to them, and to pray for and with them to give them some hope, some joy and trust - speaking to them about that Good and Merciful God who loves them and wants to walk together with them, at their side.
I went to the Center from Monday to Friday.  We generally arrived at 9:30.  I greeted all those who I met on the way.  Then I went to the dormitory and spoke with those who are there.  I invited them to pray (this is a prayer for all faiths).  The majority are evangelical, but we all pray to the same God.  Sometimes many attended the prayer; other times, they are less numerous.  Those who came, did it with great faith. 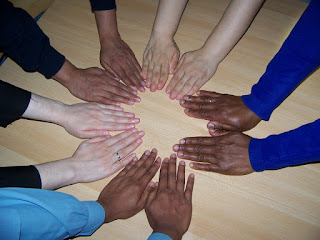 It is beautiful to work in a team where we all collaborate in whatever way we can.  It is nice to see the older religious, young people, and even some men all working together.  Some sweep; others arrange a place for the children to play; others act as a driver to take migrants to the airport or to the bus station to go to relatives or friends who are going to receive them in their homes.  Others serve the meal and help arrange the dormitories; others have cards in English and Spanish to teach words in English.
I have been able to see and admire the work of Enrique, founder of Border Angels, and of his team.  The great majority of young people are working tirelessly, to give some relief and a sense of well-being to the migrants in their long journey.  He and his team, in the Centers where the migrants arrive, are grateful, especially for the presence of some religious.  The Bishops and Priests also accepted us and are grateful for our collaboration and invite us to continue.
Finally, I can say that I have enjoyed this time of service, this time of living with my Sisters from the USA.
This mission has given me much life.  I can only end saying: How Good God is! - God who continues to motivate us to seek the poorest among the poor and neglected.  Thank you, Lord!  To you all also, many thanks for allowing us to have this working experience."
Publicadas por jpicjm No hay comentarios.: 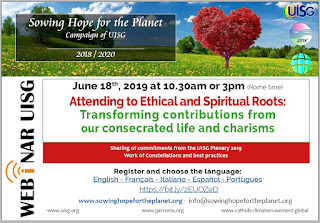 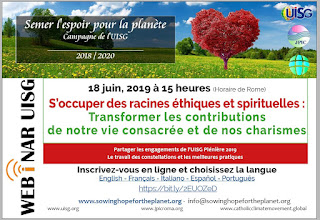 There has been a tragic rise in the number of migrants seeking to flee from the growing poverty caused by environmental degradation. They are not recognized by international conventions as refugees; they bear the loss of the lives they have left behind, without enjoying any legal protection whatsoever. Sadly, there is widespread indifference to such suffering, which is even now taking place throughout our world. Our lack of response to these tragedies involving our brothers and sisters points to the loss of that sense of responsibility for our fellow men and women upon which all civil society is founded. Laudato Si, #25

"In the darkness of the night, white vans transport migrant families to the shelter. Approximately 125 mothers, fathers and children arrive at the shelter, located in a diocesan retreat center. Upon arrival, there is a background check of the migrants by border officials, followed by a medical examination of each newcomer.  What was once a school auditorium now serves as a bedroom furnished with cots and a blanket, but no pillow. After being assigned a bed, the families are served a hot meal – their first experience of “THIS IS MY BODY OF FOOD AND FREEDOM.”
As daylight dawns, Sr. Rosie, Sr. Natalia, Sr. Rosa and I head to the shelter, show our identity to security guards at the gate, and enter the facility.
I spent my time with children of all ages doing art projects. They meet in the playroom, or weather permitting, outdoors in the sun.  Most of the children (and many of the parents) have never been to school.  Their drawings, crafts and the colors that they choose are spectacular and are a reminder on another level that “THERE IS SO VERY MUCH HOPE FOR THE EXCLUDED.”
My days with these migrant parents and children passed quickly, but remain with me for a lifetime and beyond. With all my heart I thank Claudine for the “push” that sent me to this border ministry, and to Zechariah and Elizabeth for the encouragement, model and conviction that nothing is impossible with God that led me to say “YES” to working with the migrants, even in my old age! 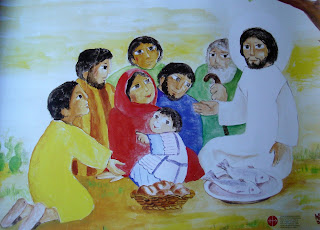 May God continue to bless and keep safe all migrant families and all those who minister to them and try to make “A PLACE AT THE TABLE” for each one." 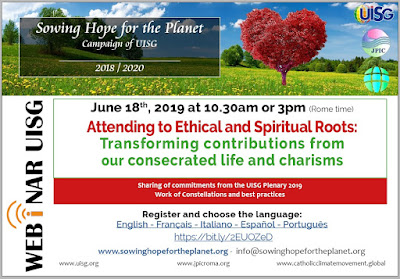 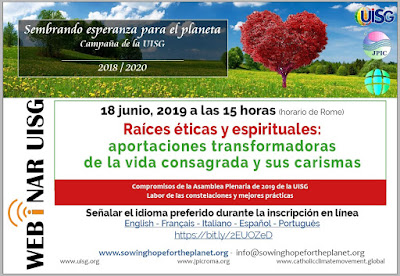 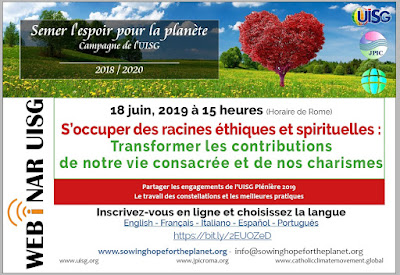 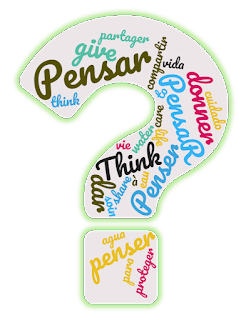