Activities with our parents

"A taste of waste"

As an effort to bring about awareness in the minds of our children, we, St.Josephs High School, Pashan, Pune, as an institution are trying our best to incorporate in our children how they can best utilize unwanted things.
As a child grows up, a wide variety of gizmos take over their minds and in turn cause them to miss out on the importance of spending time to develop their creative minds.
We have used candy sticks, paper plates, wrapping paper, thermocol glasses, magazines, straws, bottle covers, etc for craft out of waste material.
Children learn a lesson in recycling and it also encourages their creativity, igniting their artistic potential. Besides, it is a great pleasure to watch children show off “something” that they have made out of what was otherwise considered to be “nothing”.
As a finer statement it is very important to plan and execute ideas of Recycling Waste at a young age in children, as it maintains their interest and helps in saving the environment.
Making mother earth, a better place to live and breathe in has become a necessity of human life. 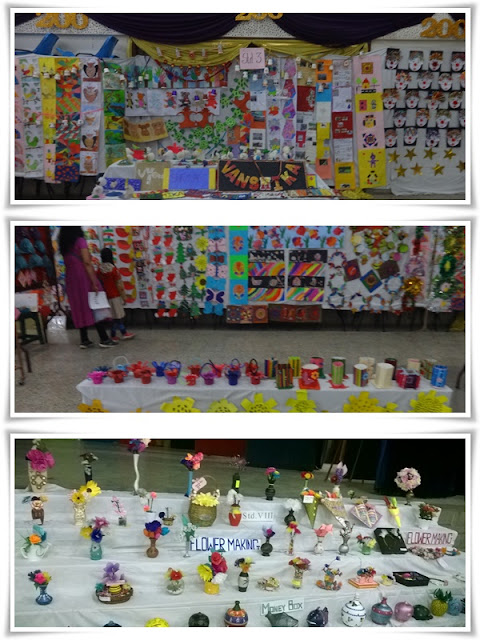 As the world longs to uphold its loosing ‘Peace’, Convent of Jesus & Mary, Kharghar resounded one of St. Claudine’s most cherished value on 10th October, 2018 during the English Elocution Competition organized for Grades  I-V  of the ICSE Section .
The day was grounded with a deep thought to encourage the young minds to ponder over the theme ‘Peace and Non-violence’. Students were enabled to spark their creativity to instil in them the thought to have peace   in the world and to strive for the same truthfully. The winners of the competition were later adjudged.
The day was thus left to be quite meaningful as it imprinted young minds with a grounded thought  to reflect on the words of Mahatma Gandhi ‘‘The future depends on what you do today.’’ Thereby, helping them to inculcate a sincere promise to make our earth a better and a sustainable place to live for generations ahead. 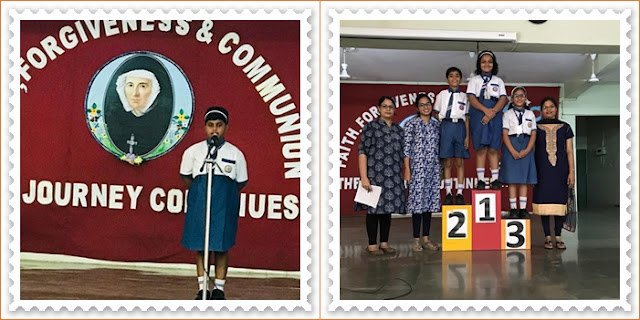 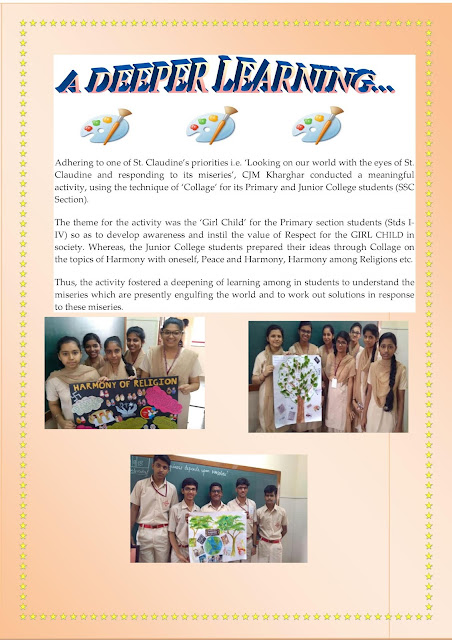 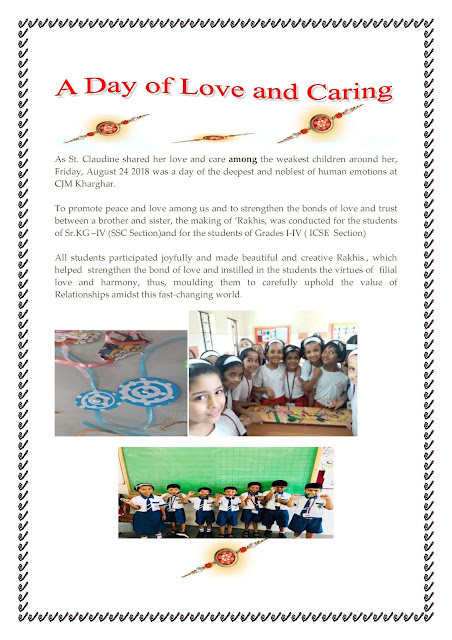 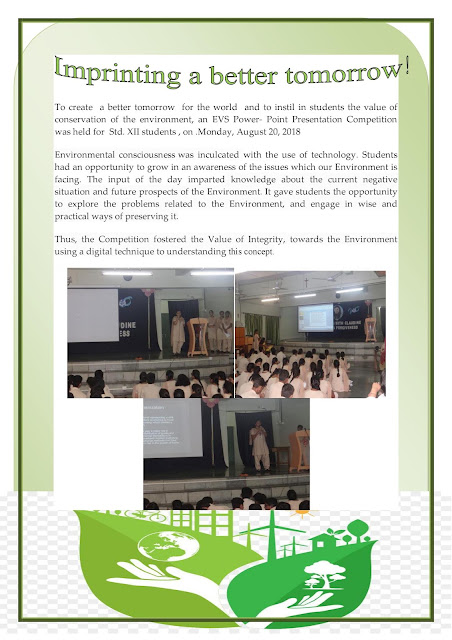 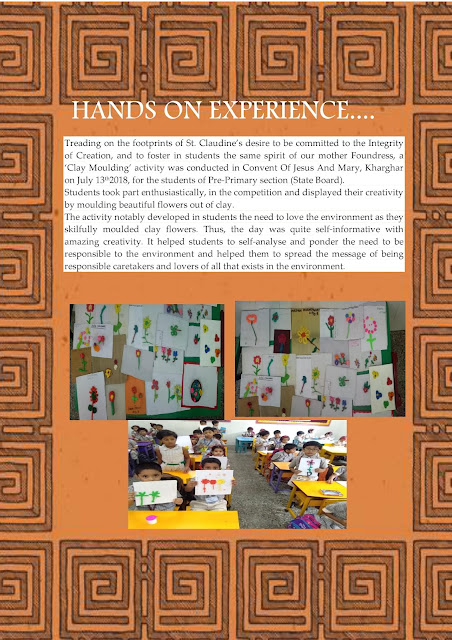 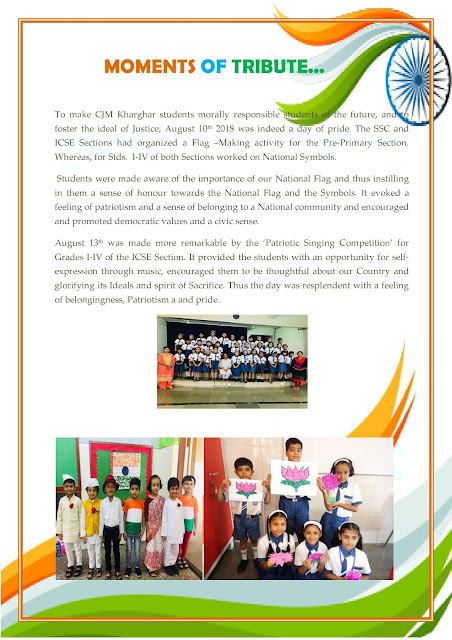 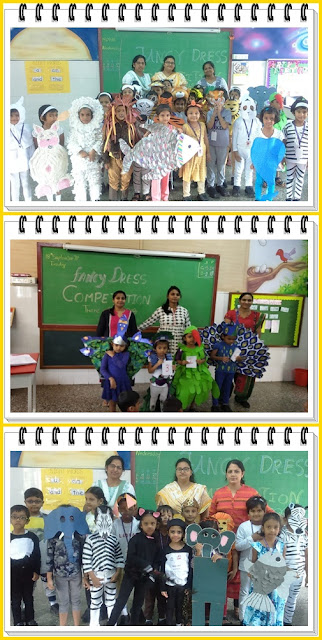 As a move to integrate students towards being the wise caretakers of the Environment, the ISCE Section had organized A ‘Fancy Dress Competition’, for its Prep I and Prep II students.


The Prep I toddlers featured as Birds while Prep II Toddlers were dressed as Animals. The activity enabled students to develop their imaginative skills and got them associated with the feelings of Birds and Animals. Students developed a great admiration and acknowledged the blessings of God’s wonderful creation around. 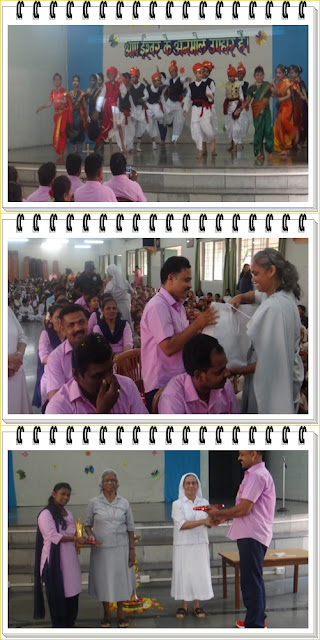 A DAY OF GRATITUDE

Treading on the footprints of our Mother Foundress to show Care and Love to the least of society, September 27, was observed as’ Helper’s Day’. It was a day to appreciate and express our sincere thanks to the Helpers in the Institution for their selfless contribution acknowledging that they are the pillars of the institution.
Such a gesture instils in students a deep respect towards those special people, who keep tirelessly working, whose efforts are silent, but important and they mean a lot. 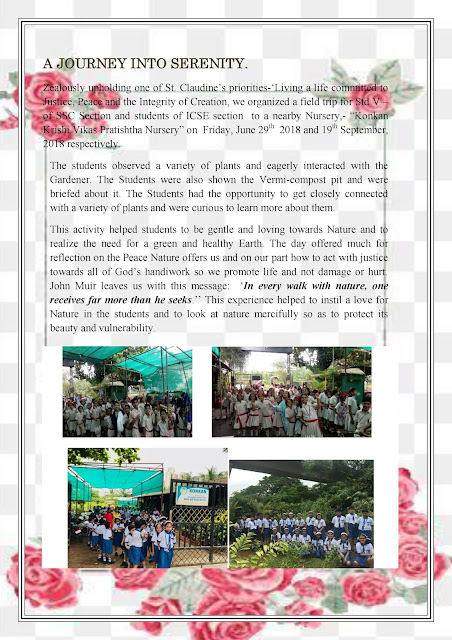 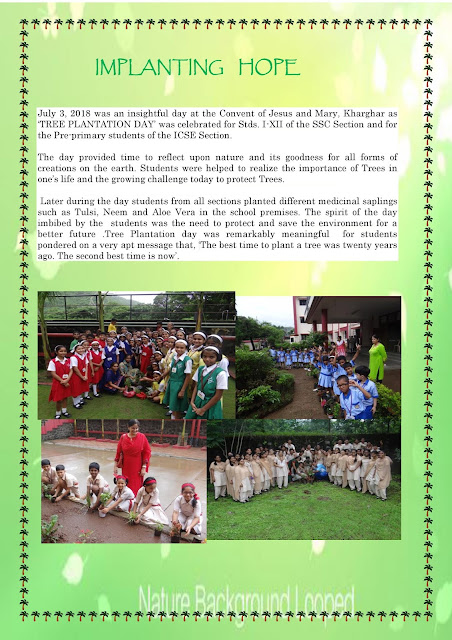 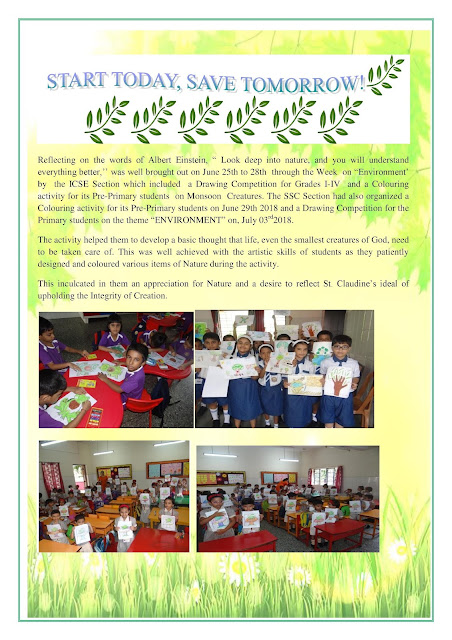 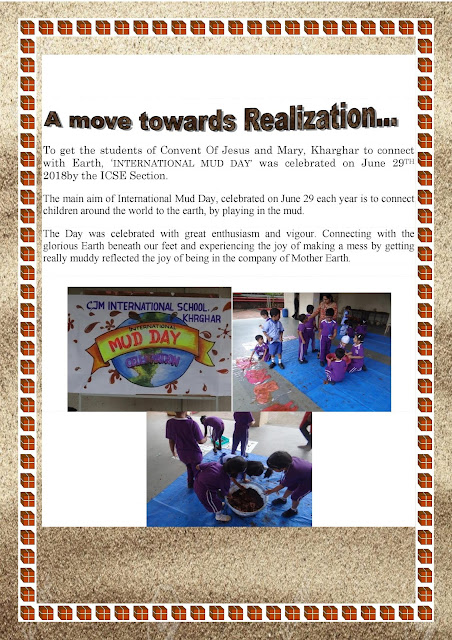 As part of the ‘World Earth Day ‘celebrations on April 22nd and in an effort to carry out one of St. Claudine’s priorities- “Living a life committed to Justice, Peace and the Integrity of Creation’, ‘GREEN DAY’, was organized in CJM Kharghar and celebrated with great zest and vigour on July 11th by the ICSE Section and September 07th by the SSC Section, to promote the need to save our Mother Earth.
However; the focus on the environment was maintained believing that man requires earth more than earth requires the man’. The significance to protect the earth was brought out very meaningfully as the students had the opportunity to get connected with green objects and a Tree hand-print activity. The ambience of the class was enhanced, as the students were dressed up in green keeping with the theme and concept in mind.
The spirit of the celebration was quiet informative and reflective as it indeed carried the message “Create a world, where the environment doesn’t need any protection.” 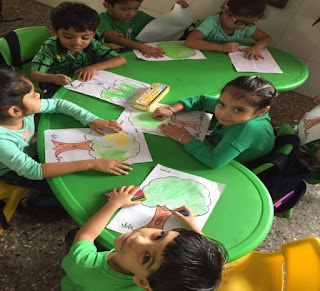 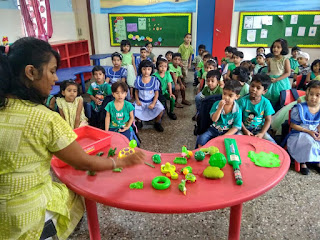 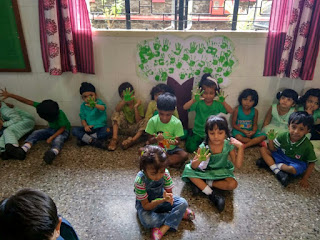 
The ICSE Section carried forward one of our Priorities- “LIVING A LIFE COMMITTED TO JUSTICE, PEACE AND THE INTEGRITY OF CREATION” as June 19th 2018   was devoted to an organized Slogan Making’ activity for the students of Grades I-IV.

Focus on the environment was sustained, by eliciting the fact that ‘man requires earth more than earth requires man’. The significance of protecting the Earth was brought out indeed very meaningfully. Students penned various slogans pondering over the issues threatening the life of the environment around us.

It also helped students to look at nature with mercy and compassion resulting in a desire to protect its beauty and restore its harmony. 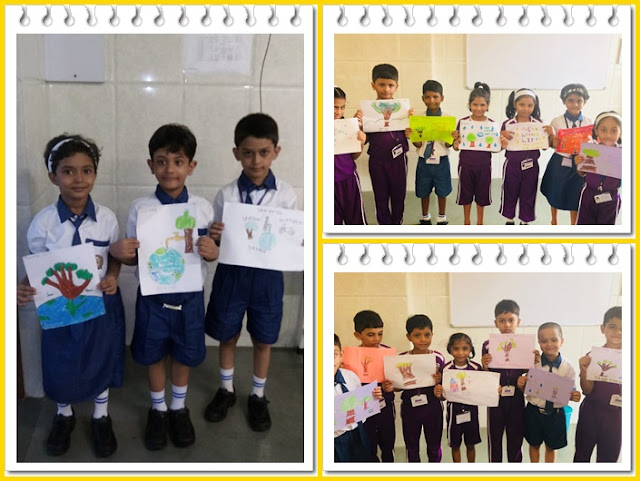 Being inspired by the zeal of St. Claudine to be caretakers of God’s creation,  ‘Blue Day’ was celebrated by the ICSE and SSC Sections of Convent of Jesus & Mary, Kharghar on June 18thand July 06th2018, respectively. Students of the Pre-primary Section were introduced to the colour “BLUE”. As the colour ‘Blue’ depicts ‘calmness of sky and water’, the celebration had a positive effect on Tiny Tots bringing harmony and brotherhood to Creation. The ambience of the class was enhanced through this activity.
The significance of the colour Blue was reiterated through a series of activities using BLUE such as hand –prints etc. Thus, BLUE DAY was an amazing learning experience, as students got an opportunity to get connected to the objects of nature. 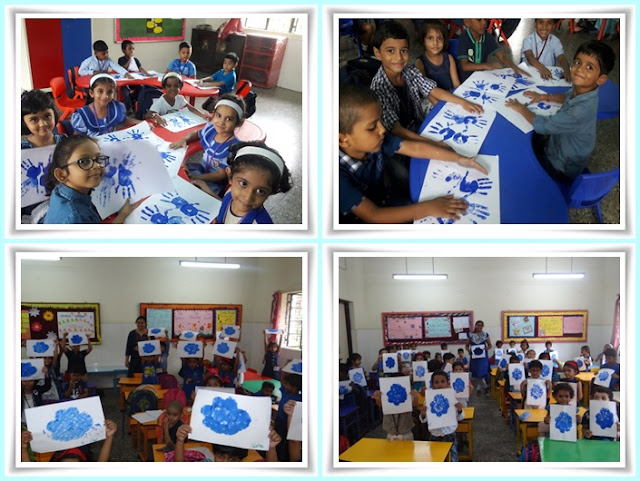